Did you ever think you could spend 2.5 hours on a walking tour that only covers a few blocks?   Of all the places in Costa Rica, the capital city of San José is the last place I’d imagine doing this.

If you look up things to do in Costa Rica, touring San José is probably outside the top 30.  A lot of visitors don’t realize that in comparison to other Latin American capitals, this one really doesn’t have anything that competes with alternate activities such as the beaches or the rainforests.  Or so I thought.

I dread San José.  Traffic, pollution, crime etc. Everything that happens there is so exhausting.  When I go, it’s usually for paperwork, which just involves more standing around, waiting in line, and trying not to get sunburned or rained on.  I had been on tours of San José before, however when I heard about a free walking tour with round trip transportation from San Ramon I decided to give it a try.  At least I’d learn something while walking and standing around in San José.

SJO vive.  Translation: San José lives.  That is the slogan designed to bring the city back to life.  I have no doubt it “lives”, however I’m sure there are many ways to interpret that.  They could be referring to a bar/restaurant district, a theater and arts area, or maybe the rat and cockroach population? 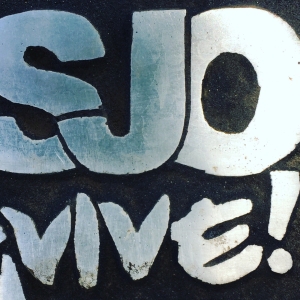 After enduring the traffic we arrived outside the national theater, where the tour would begin.  The national theater I think exists as merely a meet up point. Without addresses, people rely on landmarks to get around and this building sure sticks out.  Whether due to its elegance or the enormity of pigeon droppings, people know the place. It has never been a big conversation starter on any tours I’d been on and my eyes glazed over for most of this explanation, except when the guide told us if we go inside to the cafeteria, order something and then ask to use the bathroom, they’ll let you into the theater as that is the only way to access the bathrooms!

From there we walked across the street to “Chinatown”.  The only thing chinese about the area was an oriental arch to mark the entrance of the plaza.  There we’d see a Catholic church, a statue of John Lennon, and our guide told us he would give $50 to anyone who saw a chinese person.  The only thing newsworthy about this plaza was apparently when they put it in they eliminated a city street which sparked criticism as it added further to the city’s congestion issues.

It was interesting to hear the guide put the focus on the oddities, or failures of the city,

which might give more context to why it’s not touristy.  We went outside the National Assembly building where lawmakers allowed graffiti artists to paint the walls, but then got upset when they drew a former president to look like a monkey.  We went into an enclosed, glass dome with a stone sphere in the middle that had some sort of healing or meditation purpose, but I couldn’t hear the whole explanation as the smell of urine forced me to exit early.  We visited a Jade museum that is normally $18 to get in, however they have one free exhibition room which of course is where we went and got plenty of information.

Granted, this was a free, gratuity only tour so I didn’t have huge expectations, however I was more drawn to these outlier stories than the straight up, traditional tours I’d gone on in the past.

At the end of the tour I was shocked that we hadn’t gone into any museums or visited any markets, but I still felt like I got a lot of value out of it.  To walk so little in so much time says a lot about the guide, as there isn’t a lot to work with. I remember doing a night tour of the rainforest and the guide took us about 200 feet in two hours.  That was impressive, however I thought this guide got even more creative.

Still, unless you are spending more than a week in Costa Rica, don’t prioritize the city.  As much fun as it is to observe the endangered bicycle rider using the bike lane you’re still better off at the beach or rainforest.

To all our followers, fans, and friends:

You may have noticed a new and improved logo appearing on our web and social media sites.  In addition to a new webpage design we thought it was time after almost 3 years in business to change things up a bit.  Now you’ll see a clean fresh image to go along with our same mission:  Providing travelers with immersion experiences in Costa Rica.  Thanks to all who participated in our previous poll, ¡Pura vida!

Note: This publication was from a trip to Caño Negro in February 2015.  Written by Dustin

You wouldn’t think much from the surface, but it was hard to believe I could see so much wildlife floating down a dirty, sooty river in the middle of a flat, wetland region.

Strange that a place like this could be an attraction, when the country has numerous

rainforests, crystal clear rivers and both the Pacific and Atlantic oceans from which to take in real beauty.

But there it was.

We had turned off the highway and onto the gravel road leading to the river a few hours earlier. The sky was threatening rain. We were surrounded by muddy marsh waters on either side of the elevated road.

All of a sudden the guide got really quiet. This person – who could talk your ear off about anything on the side of the road – now seemed a little perplexed.

I wasn’t sure whether today was a bust – maybe we had turned down the wrong road or the animals had just decided stay in bed today. I wouldn’t have blamed them, given the weather.

I could tell our guide – pulling out his binoculars – was looking to find anything he could talk to us about. At this point, all he had was mud or clouds.

And then, almost as if God had answered his prayers, the first signs of wildlife appeared.

Swooping over our van and landing harmlessly in the brush was a pink stork, or something like that. It stood on its stick legs and incessantly picked the ground for food like a hen eating feed.

You could almost feel the air pressure drop as the guide let out a huge sigh of relief. He

was probably thinking, “Well, at least we saw a bird today.”

Since this was my first time visiting this river, I really had no expectations and would have been fine with any outcome. After that and before getting on the boat we found ourselves a few hundred feet from some caimans sunning themselves on the edge of the river, I figured the guide would had been elated, but he seemed unimpressed.

His focus was showing us things you couldn’t pick out with the bare eye, like a line of bats sleeping perfectly camouflaged against the backdrop of a tree trunk. He found turtles on all sorts of terrain.

He knew the route quite well and knew how to literally get the boat rocking with little effort. Just by motioning his hand to one side or the other, it would cause tidal wave as people moved from one side of the boat to the other. His enthusiasm was genuine, but you could tell he had seen these animals many times before.

We moseyed our way down the river, stopping to point out more things the guide had seen countless times before, when we heard a shriek. Not from the forest, but from our boat as our guide was anxiously directing our boat driver to the bank.

With his binoculars, he observed a tiny ball of fur perched up in the branches. It was a sloth, one of the slowest-moving creatures in the world, scratching himself on his head like a monkey.

I’d seen quite a few sloths in Costa Rica, but never one even moving at turtle speed, let alone head-scratching speed. They digest food so slowly that food they eat today won’t be used as energy for a few days, so they have to calculate every physical exertion that they make.

I felt the guide’s excitement.

Shortly after spotting this creature, the whole riverbank appeared to come alive. We heard the booming howl of the howler monkeys, and shortly after, we found a group of them playfully munching on leaves. After that, we stumbled upon a troop of spider monkeys practicing acrobatics in the branches (my first time seeing these in the wild).

Our content guide decided to call it a day and take us back to the dock for lunch. The sun had come out, and life was good.

We put the boat into high gear, when all of a sudden the driver cut the engines, threw it into reverse and swung us back into the bank to stare at the brush.

I can’t imagine what kind of sixth sense guides have to pick out things while traveling down the river at high speeds. But sure enough, after a few moments, we began to notice the branches moving up and down and then saw the unmistakable white face of the capuchin monkey looking out at us to see what the big commotion was.

There are four types of monkeys in Costa Rica, and three can be found on this river. I don’t know if a tour group had ever hit the trifecta in one day, but we pulled off what seemed to be a remarkable feat.

After cautioning the group for hours that we might not see many animals, the guide could safely let his guard down, knowing we got our money’s worth and then some.

If a picture is worth a thousand words, being there is worth a million. It’s just not the same as going to the zoo and seeing caged animals. Seeing them in their natural habitat is amazing.

I’m pretty sure our guide went home that night to brag about all the wildlife he saw that day. It must be a big ego boost for them. Even on the drive back to town I overheard him arguing with the other guides, saying how he too had also predicted it was going to be a sunny day.

Dustin lives in Costa Rica and offers immersion experiences through the website costaricafrika.com.  Find out more about him here.

Read our reviews on: